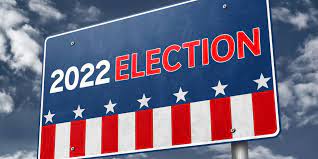 Today, we are looking ahead to the midterms. And more specifically, we’re looking at the U.S. Senate. At this point, control of the Senate next year looks like a toss-up, and that represents progress for Democrats.

The midterm election landscape has shifted

The entire landscape has shifted – at least somewhat – after the Supreme Court overturned the Roe v. Wade decision, which has really lent itself to a huge increase in democratic enthusiasm, democratic fundraising and, most importantly, the ability for Democrats to try to get their base voters out to the polls. On top of that, we’ve also seen, you know, former President Trump emerges as, you know, a main and central figure on the Republican side of things, not just in the candidates he’s endorsed – which is a big problem for Republicans, as they see it, heading into the general elections – but also the search at Mar-a-Lago, his Florida home, has really threatened to kind of make this a choice election once again rather than a referendum on democratic governance.

And reflecting these potentially tough races that Republicans are facing, Deirdre, Senate Minority Leader Mitch McConnell acknowledged last week that the GOP may have some work to do to win the Senate. Tell us what he said exactly.

I think it’s notable that McConnell made this comment in public. McConnell was asked at an event in his home state of Kentucky sort of to handicap the midterm elections and specifically said, you know, that essentially there’s a greater likelihood that Republicans will win the House than the Senate and then basically sort of gave his own analysis about, you know, the Senate races are more about statewide, but also he talked about they come down to candidate quality. This is actually something that McConnell’s been talking about for a while, and he’s made this comment before.

I think was his sort of McConnell-esque way of giving a warning to Republican candidates to sort of shape up and write their campaigns at a time where several Republican nominees in states that Republicans were hoping to flip – like in Georgia and Arizona – you know, need to sort of redirect their campaigns to focus more squarely on the issues that they think can win the election, which is what – McConnell thinks it should be a referendum on Joe Biden.

McConnell, I think, is very focused on the candidate quality that he thinks – in states that he thinks that are more flippable. And Domenico mentioned Colorado. I mean, Joe O’Dea is definitely unlike pretty much all the other Senate Republican nominees in competitive races. And this race is really shaping up to be more of a fight than Democrats were expecting. O’Dea came out of a contentious Republican primary, where he beat out more Trumpy candidates and has, you know, a position on abortion that is more in step with voters in Colorado, which Republicans I talked to think can help isolate him or neutralize that issue in the November election.

Bennet has been putting up ads recently saying, like, look; look at the latest polls. I could lose. You know, pay attention to my race. I mean, I think there’s an acknowledgment there from his midterm campaign, even, that it’s closer than they expected.

Mitch McConnell is worried about candidate quality, and that seemed to be a dig, not just at particular candidates but also potentially at Donald Trump and the candidates that he seems to be supporting.

It’s something that Trump, you know, responded to, saying that McConnell needed to do more to get these midterm candidates over the finish line and spend more money on them, etc. But they’re seen as vulnerable because of their – No. 1, their ties to Trump, their endorsing of Trump’s election lies. And they’re just seen as too hard line for, you know, purple states, places that were won very narrowly by one side or the other.

Wisconsin was always going to be a close race, but I think Ron Johnson has made it more competitive because he has the power of incumbency, right? Once he announced that he was running for reelection there, he cleared the field, and he didn’t have a primary challenge. But he’s also publicly said things that have backfired on him. I mean, he recently discussed possibly making Social Security and Medicare discretionary spending, essentially raising the issue and handing it to Democrats, saying, here’s this wealthy Republican Senator Ron Johnson, who has his own personal wealth but is possibly talking about cutting your Medicare, your Social Security.

He’s also, you know, been involved in the issue of the 2020 election, where he has publicly supported some conspiracy theories and was involved in an episode where there was an effort to forward a slate of fake electors in his home state. And he was involved – his office was involved in trying to connect with the vice president, Mike Pence, around January 6 on that issue. He’s had to answer a lot of questions about that and hasn’t entirely put that issue to rest. And I think that just sort of keeps putting him back out there and making him the issue.

Johnson just flatly is not very well-liked in the state overall. Mandela Barnes, who’s the lieutenant governor, you know, so far he’s leading in the polls, but he’s less well-known so far, and Republicans really feel like they can define him. In particular, they’re going to try to tie him to the Abolish ICE movement, which is something he’s tried to distance himself from in recent months, trying to make him look as progressive as possible in a state that’s concerned about crime, for example.

Ohio is, to me, a fascinating race, where Republican J.D. Vance just got a $28 million boost from Mitch McConnell’s affiliated super PAC. And also, this is a state that Biden lost by eight points in 2020. But on the other hand, Democratic Congressman and Senate candidate Tim Ryan is running pretty strong in that reddish state, even if he’s not quite ahead.

Vance is another one of these candidates that Trump elevated through the primary. This is a state, again, that Trump won and that all of the sort of, you know, usual indicators would say that this is going to regress to the mean and that it would give Republicans the advantage. But right now, Vance is struggling because of controversial comments, for example, that he’s made on women and family and what Republicans see as not really running a very strong campaign, frankly, while Tim Ryan has been basically campaigning for this seat for years, it seems, out there and, you know, frankly, using abortion rights as one issue that he’s trying to get women on board to come out to vote for him. You know, we’ll see if this holds at the end of the day because both sides expect this race to get much, much tighter.

I think this is an instance where McConnell’s comment about candidate quality, candidates’ matter, really comes into play, right? Vance came out of a contentious primary process, obviously, you know, endorsed by Trump – really helped him win that primary. Tim Ryan was sort of out there alone for a while running, you know, a campaign and campaigning in, you know, parts of the state that are reliably red. And he’s tried to fashion himself as sort of this Sherrod Brown-type candidate. And Sherrod Brown is the Ohio Democratic senator who successfully won his campaign by appealing to working-class voters in the state.

Nevada is a target for Republicans for midterm election

I’m definitely watching Nevada – Catherine Cortez Masto, who is the freshman senator there, has been one of the top targets that Republicans have been looking at, you know, since the beginning of this election cycle. I think a lot of people are surprised that the latest polls actually show her up a bit in a state that’s, you know, sort of really 50-50 in the last few elections.

I think that she has a lot on her plate in terms of dealing with the issues of inflation. But she’s also been focused a lot on local issues, on water issues, on fighting wildfire issues. And I think trying to keep the conversation about particular issues in the state and trying to sort of distance herself from President Biden and his unfavorability ratings in the state have been a sort of a good strategy for her so far. We’ll see whether that holds in the next few months.

I think Georgia and Arizona – the two sort of rising Sun Belt states – I think are the other two that I’m kind of looking at that everyone’s sort of wondering which way they’re going to go because you’ve got Raphael Warnock, the Democrat there who’s the incumbent in Georgia. And, you know, what Republicans are saying is that they’ve really had a kind of tough time really seeing which issue set would stick to Warnock, how they’re going to sort of breaking him down. ‘Cause in the last election, they feel like it was a huge mistake to try to paint Warnock as a radical.

And Republicans are acknowledging now there’s just no way to make him look like a bad guy. I mean, this is the pastor at Ebenezer Baptist Church, the same post that Martin Luther King Jr. held. So they’re just going to wind up attacking him on voting in a way that is out of step with the state, although Georgia’s pretty darn purple. They do expect, though, that the gubernatorial race where Brian Kemp is favored – the Republican – that will help the Republican in this race, Herschel Walker, Trump-backed, who’s had a ton of problems and issues as a candidate.

Mark Kelly, who was an astronaut, a freshman senator, is running for a full six-year term, and he’s running against another Trump-backed candidate, Blake Masters. Kelly, who’s raised a ton of money, was already on TV with a lot of ads talking about his personal story and trying to talk about what he’s done for the state at a time where the contentious Republican primary was sort of battling out who was the sort of Trumpiest (ph) Republican.

Kelly has a financial advantage over Blake Masters in midterm race

So I think now that we have a clear matchup between Kelly and Blake Masters, you know, this is a state where people remind me over and over when I talk about Arizona that it’s a third Democrat, a third Republican, a third independent. So I think Kelly’s ahead in the polls now and definitely has an advantage in terms of money. But this is another place where we expect it to tighten.

And who appeals to independents in that state is really going to matter a lot. And Democrats are banking on abortion rights being the issue that will win them over and help, frankly, put Kelly over the edge.