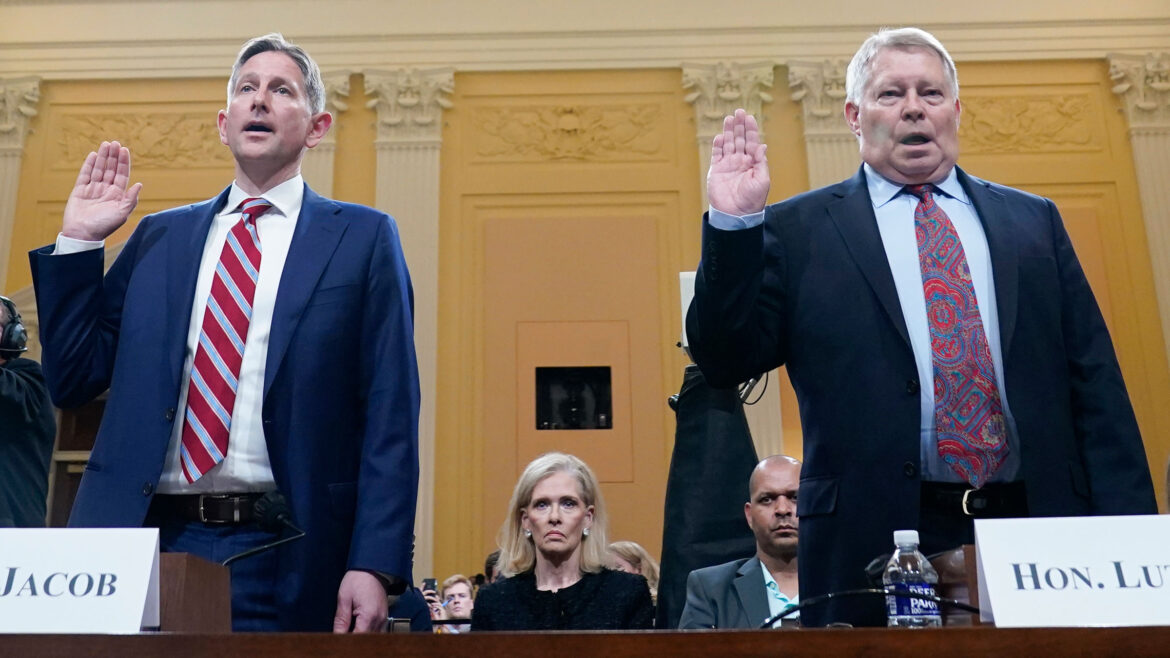 We have reached the third hearing from the House Select Committee investigating the attack on the U.S. Capitol on January 6. We heard from Greg Jacob, a lawyer who used to work for former Vice President Mike Pence, as well as J. Michael Luttig, a retired 4th Circuit judge who also advised Pence during the presidential transition period. The hearing opened with strong words from committee members, including Vice-Chair Liz Cheney, Republican of Wyoming.

Much of the hearing revolved around the legal theories that the Trump team relied on in the period after the 2020 election to try and overturn the election results. Specifically, it was around Trump’s justification and his legal team’s justification to get then-Vice President Mike Pence to step in and stop or delay the counting of Electoral College votes. In the testimony today, Pence’s team made it clear that they felt like Pence did not have any legal standing to do that, which – I should note that at that time, after the 2020 election, that’s the same opinion that basically the entire legal community also had.

This is in contrast, of course, to the constant public and private pressure from President Trump to do just that.

Serious divide between Trump and Pence

They all really captured this dramatic splinter, this divide that came clear by January 6 in terms of Team Trump, in terms of lawyer John Eastman, who was advising the former vice president to break out of his ceremonial constitutional role and certify the results last year, January 6, at the Capitol. And what the panel would argue is commit illegal acts by trying to throw the election Trump’s way instead. And so it was really palpable the anger that we heard in terms of what was taking place between Pence’s team and Trump’s team when it came down to the weeks before January 6, the day of and the fallout that followed.

There was no basis in the Constitution or laws of the United States at all for the theory espoused by Mr. Eastman.

Well, we should start by saying that he is not a stranger to Michael Luttig. He was actually a clerk for Michael Luttig on the 4th Circuit Court of Appeals in Chicago after he had graduated from the University of Chicago Law School. And he went on from that to be a law clerk for Clarence Thomas on the U.S. Supreme Court. Now, after that, he went out to California. He ran for office, ran for Congress, ran for statewide office, was unsuccessful in those efforts, and wound up being a professor and later the dean of the Chapman University Law School. And that is in Orange, Calif. He has also been an activist in the conservative movement, the Federalist Society, and so forth and has been a prolific writer and somebody who was well-known in conservative circles.

Eastman had written some sort of provocative things, among other things, suggesting that Kamala Harris was not properly constitutionally qualified to be vice president because her parents were not permanent residents, not both of her parents at the time – she was born in Oakland, Calif. – things of that nature that were clearly wrong and widely discredited. Yet he would throw out these rather provocative things.

And one of them was that it was in the power of the vice president to essentially supervise the counting of the electors in such a way that he could discredit some of those electors – so, you know, some controversy about that. I’ve heard something about some alternative electors from Arizona or several other states. And so we’re going to send that back to the states and let them straighten that out, all of which would have, of course, resulted in there being no winner. And the already determined Electoral College – as has already been said, that was a theory without any basis. Even his former mentor, Michael Luttig, was there today to denounce it in no uncertain terms.

We also learned from Greg Jacob that Vice President Pence told Trump again and again there was no legal basis for what Eastman was asking Pence to do. In fact, we heard Jacob say at one point this was the vice president’s first instinct – was this was not constitutional to follow through with Trump’s plan.

And there were some testimony today from other witnesses that seemed to indicate that Eastman himself, at different points, seemed not 100% to believe these same theories.

We learned that he was in not such a safe location. He was only 40 feet away. He had been ushered just a short distance from the chamber, from where these rioters had entered the chamber. They were looking for Mike Pence, as we’ve heard time and time again. They were chanting, hang Mike Pence. And so there was a clear mission here for many of the rioters to find him, for some to hurt him. At one point, we heard the California Democrat, Pete Aguilar, who sits on this committee and was largely leading today’s hearing and the questions, talk about the threat that was faced to the vice president – that there were extremists who were there at the Capitol looking to kill him.

There was also news today, first reported by The Washington Post, regarding Ginni Thomas – who is the wife, of course, of Supreme Court Justice Clarence Thomas – that the January 6 committee has evidence that Thomas was in communication with Trump attorney John Eastman.

Chairman Thompson told reporters after the hearing today that the committee has already issued a letter to Ginni Thomas, asking her to appear before the committee. This is raising an old issue for the panel. They had considered this back in March, Thompson told us – I’m going to tell the panel, let’s get her in front of the committee – and then today, with this new reporting from The Washington Post that the panel has obtained new exchanges of emails between Thomas and John Eastman that they want to talk to her definitively this time. Thompson appeared surprised when he was told by reporters that Thomas already told The Daily Caller, another publication out here in the Washington, D.C., area, that she was looking forward to appearing before the panel.

We don’t know whether or not she had befriended or in any way or another knew John Eastman when he was one of her husband’s clerks. That was some years ago, but it is certainly conceivable that she would have at least met him. And they do seem to have been, according to this reporting in The Washington Post, in some sort of communication at the same time that Ginni Thomas was talking to Mark Meadows on email.

Mark Meadows, of course, being the president’s chief of staff at the time – and that they were involved quite directly and aggressively in trying to overturn the results of the election at a time when cases were coming before the Supreme Court to attempt to do that same thing. And the court rebuffed them. There was an instance where Clarence Thomas was the only vote to say, let’s not release that particular set of information. But apart from that, he was generally voting with his justice colleagues. But it is, nonetheless, an eyebrow-raising set of circumstances.

Today’s hearing, I would say, more than the first two hearings that we heard, got a little bit in the legal weeds, which I feel like, for me, as somebody who has thought as much as I have about the Electoral Count Act of 1887, it was awesome.

But maybe for the general public, there was a little bit more jargon, legal jargon, that kind of came up. I want to listen to Michael Luttig and hear what he said about what would have happened on January 6 had Mike Pence done what Trump was asking him to do and, you know, mess with the Electoral College votes being counted.

He went on to say in his closing statement that, quote, “Donald Trump and his allies and supporters are a clear and present danger to American democracy.” What did you make of his and of the other attorney who spoke today, Jacob’s, tone today?

I was taken aback that Michael Luttig would have gone this far and gone this far on national television. This is a man who, you must remember, is an icon of the conservative legal movement in the United States.

Michael Luttig was once a conservative icon

He has been on the very short list for the Supreme Court – was perhaps the one on the shortlist of three or four that did not get the appointment under George W. Bush back in the first decade of this century and someone whose reputation could just not be more sterling. And that’s why Mike Pence went to him. That’s why people asked him what he thought of this idea. And that’s why his absolute judgment on this and his complete lack of any interest in it whatsoever was so powerful to people like Mike Pence. For him to say that former President Trump and his supporters are carrying forward this same kind of scheme into 2024 is truly chilling.

I keep thinking about how much the committee is focusing on hearing from people who are in Trump’s inner circle or, just more broadly, people who are bona fide conservatives. It feels like that is part of the strategy here in these open hearings.

They’re keeping up this strategy from the first hearing on, which is telling the story not through the panels’ voices as much as they’re doing it through members of Trump’s inner circle. Today we heard from members of Pence’s inner circle and the alarm – the extreme alarm that was driving through Pence’s team as they saw Trump and his allies trying to undo the 2020 election.