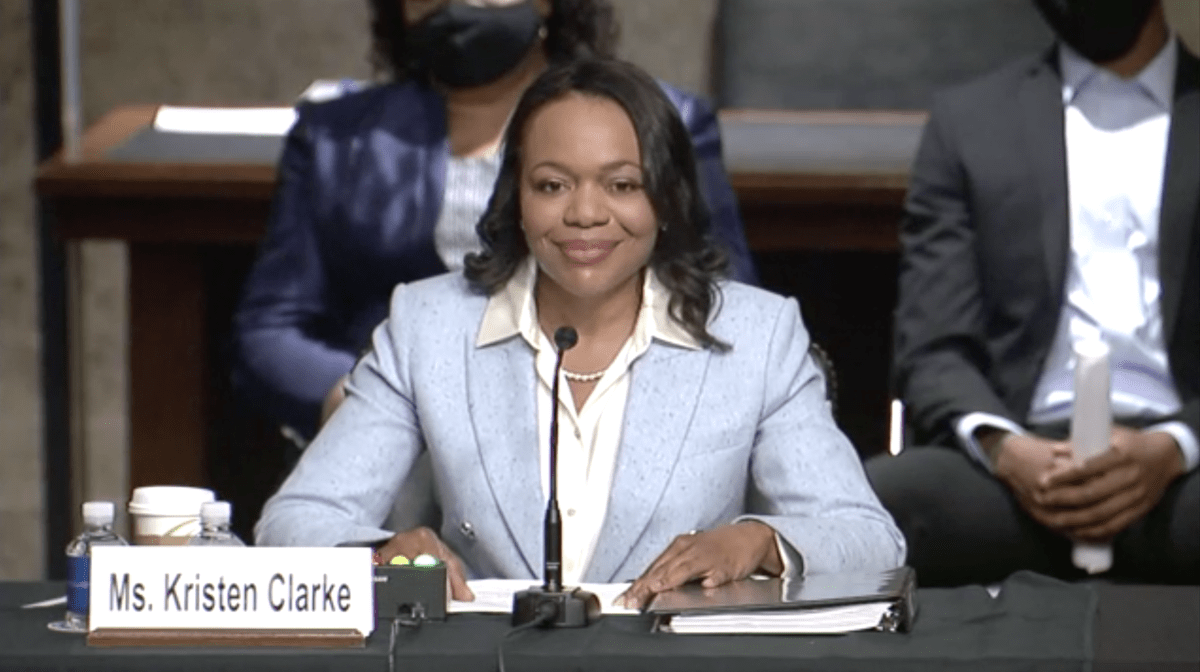 Kristen Clarke has been confirmed with a 51-48 vote, to the Department of Justice’s Civil Rights Division, after Senator Chuck Schumer used a discharge petition to get the motion to be considered by the full Senate. Chuck Schumer called her a proven civil rights leader and said that she would fight bigotry in many ways.

Kristen Clarke familiar with discrimination and ready to fight it

Ms. Clarke has faced discrimination before. During the fall, when Trump was trying to claim that he won the 2020 election, Kristen Clarke, the head of the Lawyer’s Committee for Civil Rights Under Law, received messages that targeted her race specifically. May you be found guilty by a military tribunal and executed by hanging, the Post is reported one of the emails that she’s received has said.

Kristen Clarke has dealt with issues of equality before. Sherrilyn Ifill,, who was the President of the NAACP Legal Defense and Educational Fund, where Kristen worked between 2006 and 2011 highlighted Clarke’s efforts on prosecuting hate groups.

She was specifically on the leadership for prosecuting the Proud Boys for their attack on the Metropolitan African Methodist Episcopal Church on December 12th, 2020. It sought to prosecute Enrique Tarrio, the chairman of the Proud Boys, and other individuals that participated in rampaging through downtown Washington D.C. on December 12, as the lawyerscommittee.org article noted.

She was responsible for prosecuting the Proud Boys

It should be noted that the Proud Boys participated in the insurrection of 1/6, so far, according to the Post, about a dozen members or associates of the Proud Boys or Oath Keepers have been charged, with assaulting police, the Post noting that 30 of 75 are continuing to be held.

White supremacists like the Proud Boys, would rather see the country burn than to see it united together under justice and freedom for all, Kristen Clarke Though my Republican colleagues have tried to twist her words to make her sound like some radical, Ms. Clarke is — in reality — a hugely accomplished civil rights attorney who has earned the respect of all sides, Senator Chuck Schumer.

It should be noted that Kristen Clarke has received criticism from Tucker Carlson for accepting a talk from Tony Martin, who wrote the book the Jewish Onslaught, that was a guest speaker from Harvard in that year. He wanted to speak with a group against The Bell Curve, a book that has tied intelligence to race. Kristen defended some of the comments that Tucker made that he claimed demonstrate that she was saying that Black people were more intelligent than White people, by, stating that she was trying to present an equally absurd point of view.

Kristen Clarke attempted to distance herself from Tony Martin

Tony Martin said that Jews were persecuting Black people. Initially Kristen Stewart defended her decision to speak there, saying he was an intelligent, well-versed, Black intellectual, who bases his information on indisputable fact. Later, Clarke said that it was a mistake to accept the request to speak. And, also to defend him at that point in time. Kristen Clarke has denounced anti-Semitism, and, Michael Goldenpine, a student leader at Harvard, said, that the Black Students Association said they would agreed to meet with an interfaith group, following Martin’s speaking role, to try to amend relationships between Black and Jewish students at the school.

NOTE: This article contains affiliate links, which will earn the site a commission if the product is purchased. If you enjoy our writing, please consider leaving a small donation. Your support helps keep the lights on and allows us to hire more writers and grow our site.