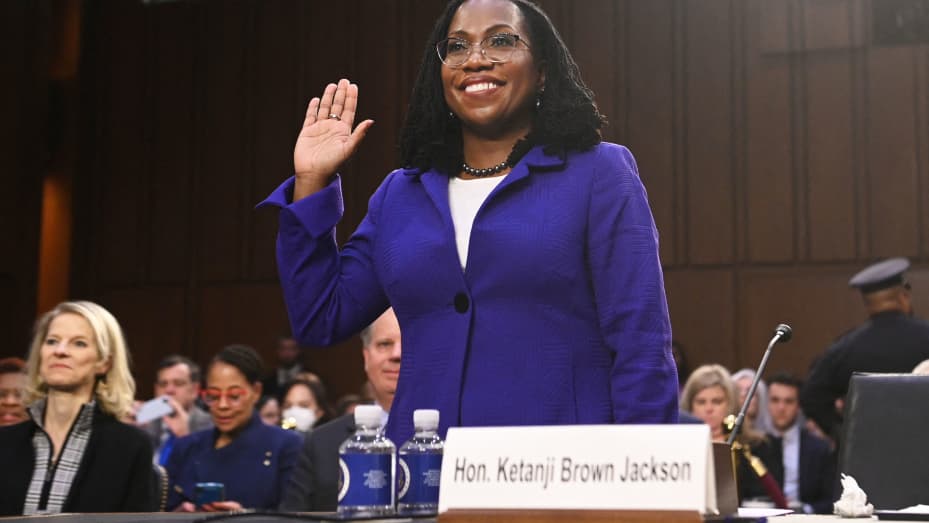 On her first day of Supreme Court confirmation hearings, Judge Ketanji Brown Jackson told senators that she “stands on the shoulders” of those who came before her and decides cases “from a neutral posture.” While she has broad support from Democratic senators, Republicans are likely to press her on her record as a public defender when questioning begins Tuesday.

Well, I would say that one of the most interesting things about today’s hearing, which was fairly formalistic, after all – there were no actual questions and answers – was what was going on in the rest of the room. So Judge Jackson had not only her husband and children but her parents here, her husband’s parents, siblings. And at various times, all of them were fighting back tears, even the nominee. When she was being introduced by her college and law school roommate, Lisa Fairfax, you could see Jackson’s nose redden. And she reached for something to keep the tears in check in her eyes. So even the nominee, when somebody else was talking about her in a nice way, teared up. Then, too, there was her husband’s foot, which almost never stopped moving. That’s where all the tension was.

One of the things that really jumped out at me was even though she didn’t have that much to say today, it’s very difficult to sit still for six or seven hours and not display any discomfort. Especially when people are saying things about you that aren’t always so positive. And her kind of unwavering facial expression and her very big smile, I think, go a long way in explaining how collegial she is.

She did seem to be, in some ways, preempting the questions I assume she anticipates, especially from Republican senators over the next two days, about her judicial philosophy such as it is. And she kept coming back to these themes of impartiality.

The theme of transparency is one that really extends throughout her career. I feel it’s really resonates with something she said based on her experience defending poor people in court and on appeal, which is that she came across so many people who didn’t understand the way the process worked. And ever since then, when she was a district court judge and then when she was elevated to the appeals court, she wanted to make clear to real people moving through the system in some way or other – civil court, criminal court – the way this process works, what matters, and the idea that she’s going to be taking the facts before her and applying the law and doing it in a way that comes out in an impartial, neutral way. And that’s really a theme of her life in the law, I think.

Democrats are obviously very excited about this nomination. They were effusive in their praise of her yesterday. She’s going to face some tough questions from Republicans over the next two days about her record. Particularly on crime and on her impartiality. They previewed some of those lines of questioning today. Senator John Cornyn, for example, said he was troubled by some of her defenses of terrorism suspects.

Very likely she will be confirmed even without Republican support

Even if no Republicans get on board with this nomination, she’s still pretty certain to be confirmed. Democrats have a 50-50 Senate. They have Vice President Kamala Harris who can break a tie. So the outcome doesn’t seem necessary in doubt as we sit here right now. Well, she certainly knows what’s coming her way. And the trick for her, I think, is to seem at once responsive without getting herself in trouble. So what we’ve seen in recent years from both Democratic and Republican Supreme Court nominees is that they are very well-schooled in saying nothing. Asking them questions is like asking questions of a wall.

The ones who have actually gotten some traction from their opponents, as it were, are the ones who have some genuine charm. And obviously, the Chief Justice, John Roberts, is considered the gold standard for a Supreme Court nomination, the best that almost anybody has ever seen. So the next two days could be pretty contentious.

I’m sure there’s going to be some partisan moments. But I’d like to end on a sort of nicer note because it was a historic day. And it was fascinating to see a Black woman sitting in a seat that no other Black woman has sat in before. And Cory Booker is a Democratic senator from New Jersey, and he spoke to that. He referenced that one of her two younger daughters, when President Obama was in the White House, wrote the president a letter telling him that they believe that their mom should have this job.