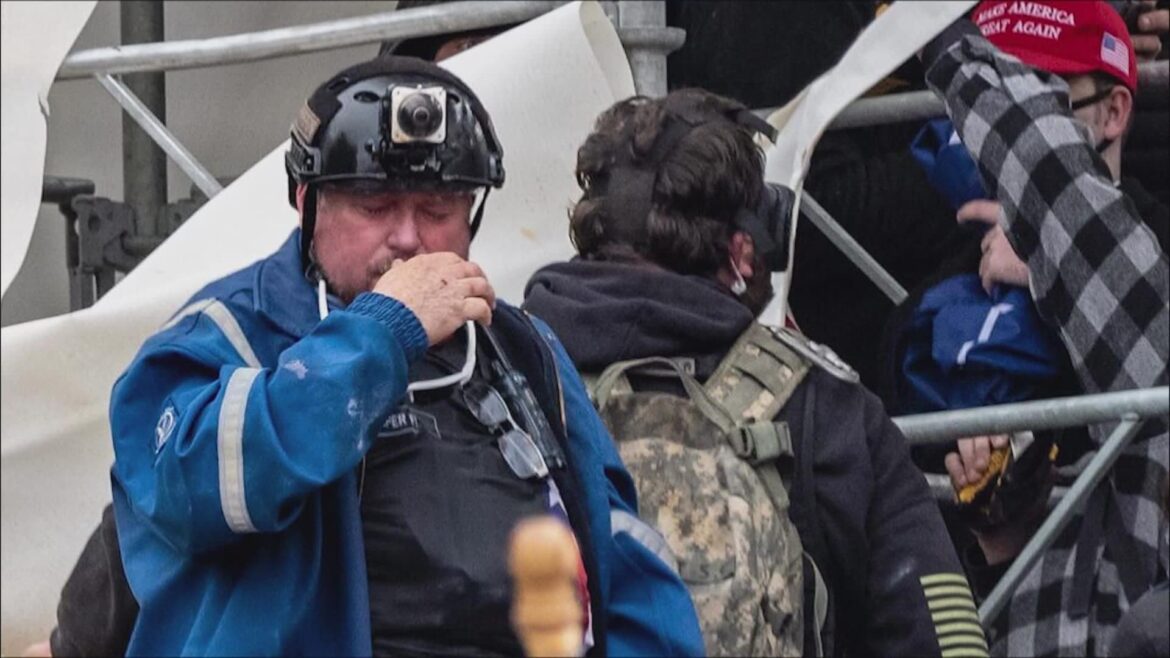 A federal judge on Monday sentenced Guy Reffitt to more than seven years in prison for storming the U.S. Capitol on January 6, 2021.

The sentence for Guy Reffitt, a member of the Texas Three Percenters militia group, is the longest so far imposed among hundreds of Capitol riot cases.

Reffitt told fellow militia members he planned to drag House Speaker Nancy Pelosi out of the Capitol building by her ankles, “with her head hitting every step on the way down,” according to a court filing.

Guy Reffitt was the first person to go on trial for the Jan. 6, 2021, attack, in which supporters of then-President Trump halted the joint session of Congress for certifying Joe Biden’s 2020 electoral victory.

His prison sentence — seven years and three months — is two years more than the previous longest prison sentence for a Capitol riot defendant. Assistant U.S. Attorney Jeffrey Nestler had requested 15 years for Reffitt, calling him a domestic terrorist who wanted to physically remove and replace members of Congress.

Reffitt offered up an apology

Moreover, U.S. District Judge Dabney Friedrich rejected prosecutors’ contention that an “upward departure for terrorism” was warranted in Reffitt’s case. It was the first time that prosecutors have requested that sentencing enhancement for a Jan. 6 case.

Friedrich, however, questioned why Reffitt would merit the terrorism enhancement when many other rioters engaged in violence and made similarly disturbing threats.

On Monday, Reffitt offered an expletive-laden apology to police officers, lawmakers and congressional staffers who were at the Capitol on Jan. 6.

Defense attorney Clinton Broden asked for Reffitt to be sentenced to no more than two years in prison. Broden noted that Reffitt didn’t assault any law enforcement officers or enter the Capitol building.

Videos captured the confrontation between outnumbered Capitol police officers and a mob of people, including Reffitt, who approached them on the west side of the Capitol.

Reffitt entered the capitol with a loaded weapon

Reffitt was armed with a Smith & Wesson pistol in a holster on his waist, carrying zip-tie handcuffs and wearing body armor and a helmet equipped with a video camera when he advanced on the officers, prosecutors said. He retreated after an officer pepper sprayed him in the face, but he waved on other rioters who ultimately breached the building, prosecutors said.

Moreover, the jury found him guilty of obstructing Congress’ joint session, of interfering with police officers outside the Capitol, and of threatening his two teenage children if they reported him to law enforcement.

Reffitt’s 19-year-old son, Jackson, testified that his father told him and his sister, then 16, that they would be traitors if they reported him to authorities and warned them that “traitors get shot.”

Reffitt lived with his wife and children in Wylie, Texas, a Dallas suburb. He drove to Washington, D.C., with Rocky Hardie, a fellow member of the Texas Three Percenters militia group.

Hardie testified that both of them were armed with holstered handguns when they attended Trump’s “Stop the Steal” rally before the riot. Hardie also said Reffitt gave him two pairs of zip-tie cuffs in case they needed to detain anybody.

Reffitt is one of seven Capitol riot defendants to get a jury trial so far. Jurors have unanimously convicted all seven of them on all counts in their respective indictments.