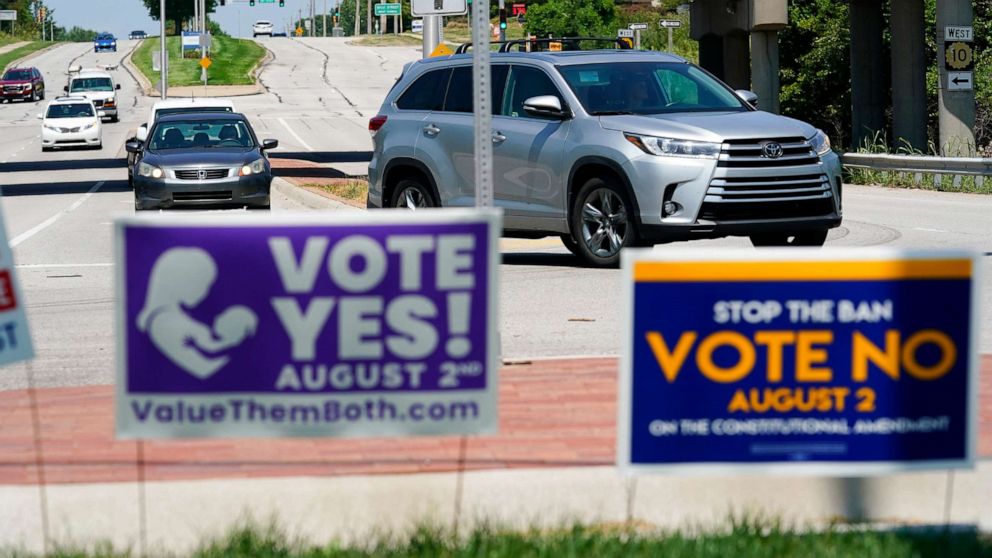 This is the first vote on the topic of abortion since the Supreme Court overturned Roe v. Wade in June. And it is in a red state. Kansas is very conservative. And so what happened was this – the voters rejected a proposed amendment that would have made it explicit in the state constitution that the state constitution does not protect abortion.

Abortion a key issue in Kansas

And that’s important because currently in Kansas, a 2019 Supreme Court ruling is what holds sway. That ruling said that the state constitution does protect abortion, and that is what allows there to still be abortion rights in the state now. Right now in Kansas, abortion is legal up to 22 weeks, though there are plenty of restrictions on that. For example, to get an abortion, a patient needs to get an ultrasound, and has to observe a 24-hour waiting period. So that’s where we are.

There is pretty good evidence that some Republicans and right-leaning independents also came out and said, you know, this amendment is just too far. I can’t vote for it. Should the amendment have passed, it would have opened the door to allow the legislature to pass all sorts of restrictions. And opponents of the amendment, aka abortion-rights supporters, they were very worried and very much campaigning on the idea that legislators would pass a total or near-total ban on abortion when they got the chance.

The Trump endorsement has a lot of sway in the primaries

There was a bit of a late push to back a conservative businessman, Beau Lane, who was seen as the best shot at preventing Finchem from making it to that November ballot. But what we’ve seen in Arizona so far this election is that the Trump endorsement has a lot of sway in these GOP primaries. Particularly what we’ve known is that Trump’s endorsement carries a lot more weight in crowded primary fields. So there were four Republican candidates running to be secretary of state, running for the top election gig in the state, and Trump’s endorsement carries somewhere around 35, 40% of the GOP base. That’s enough to carry someone as extreme as Finchem across the finish line in the primary when there’s three other candidates who are also splitting the vote.

I also should note that Finchem is now the sixth election-denying candidate to make it on the November ballot in a state to oversee voting, which, you know, obviously has election experts pretty worried, considering the sorts of policies that election-denying candidates over the last two years have been shown to support – things like rolling back early voting and trying to get rid of mail voting altogether.

Former venture capitalist Blake Masters is going to face off against the incumbent Kelly in November. Masters is probably best known as being an acolyte of conservative billionaire power broker Peter Thiel. And he was able to, again, win a crowded primary for the GOP nomination for the U.S. Senate thanks in part to another Trump endorsement, but also thanks in part to Thiel spending millions and millions of dollars to help support his former employee, his mentee, if you will.

Masters is going to be a candidate much like Finchem in that he has stated he would not have certified the 2020 vote. He said in an interview that he would have, like Ted Cruz and Rand Paul, objected to the Electoral College review of votes from Arizona. So we’ll see, I guess, how that message plays in November. But so far, it was a winning message for Republican candidates almost up and down the ballot.

There has been good news overnight for yet another Trump-endorsed candidate. That’s former local TV news anchor Kari Lake. She was trailing in the polls when the first early results were released last night around 8 p.m. Arizona time. She was down about nine points to conservative land developer Karrin Taylor Robson, who is the more establishment-backed candidate in this race. But as more and more Election Day votes were released, we started to see Lake picking up. You know, 60% of this batch of ballots, 55% of that batch of ballots.

And eventually, overnight, Lake actually took the lead. She’s now up by just under two points as of about 8 o’clock Arizona time this morning. That’s an 11,000-vote lead – a slim one at that. But there’s still tens of thousands of ballots to be counted, especially here in Maricopa County in the Phoenix metro area. And if the trend continues that some voters who waited to cast their ballot on Election Day or maybe waited to turn in their ballot on Election Day, they seem to be favoring Lake.

And that kind of makes sense given the campaign that Lake has run bashing the 2020 election. In the recent weeks, she’s even claimed that this current 2022 vote is somehow rigged against her. The early votes favored Karrin Taylor Robson. Those are people who are comfortable with the voting process here in Arizona. The late votes so far seem to be favoring Lake, so we could see Lake’s lead grow in the hours and days to come.

Some voters willing to cross the aisle on issues like abortion

This particular vote, I would say it tells us some but not a lot. And to explain that, what it does tell us is that in isolation, when you put a single question on the ballot that is specifically about abortion and specifically about the potential to make very tight, very restrictive abortion laws, that voters turn out, and some are even willing to cross the aisle. That’s what – I mean, that is basically what this tells us.

when you really think about it, you can put this vote in the context of other ballot measures we’ve seen over the years in – sometimes in red states where voters, even conservative voters, vote for ballot measures that are seemingly more progressive than the state’s politics on things like, oh, minimum wage, marijuana laws, that sort of thing. So it tells us something about that.

Now, that said, it is hard to overestimate how very fired up abortion does make especially many particular left-leaning Democratic voters or some independents, some moderates who just feel strongly about reproductive rights. So the one thing that I would say is that, for example, if you are a Democrat who supports abortion rights, which is most Democrats that are running for office, and you have a very anti-abortion rights opponent, I would imagine that those candidates are going to run really strongly on slamming their opponents’ abortion records.

Majority of people do support abortion rights in some sense

And it also seems to kind of bear out what we’ve been talking about over the last few weeks about kind of broadly national feelings about abortion rights, right? Somewhere in the 60% or 70%, depending on what poll you look at – you know, the majority of people do support abortion rights in some sense.

And then the other thing that we’ve been watching from overnight is there were three Republican House members who were running in primaries who had previously voted to impeach former President Donald Trump.

Let’s start with the one that we know for sure, which is Peter Meijer in Michigan. Representative Peter Meijer was defeated in his primary by the Trump-endorsed John Gibbs. So that is the one data point we do have from last night that, you know, this representative who voted for impeachment was ousted.

Washington primary is too early to call

But there are two more we’re watching – Jaime Herrera Beutler and Dan Newhouse in Washington state. It is still too early to tell. They’re still waiting on a lot of votes there. But as of right now in that state’s top-two primary system, both of them are at or near the top of their fields. So if either of those two can pull off a primary win and can get onto the general ballot, that, you know, would signal that voting for Trump’s impeachment is not necessarily the death knell that some may have thought in the Republican Party these days.

We saw a lot of success last night in Arizona for candidates who have voiced sympathy to the false idea that the 2020 election was stolen. But that, we know, is not necessarily a winning strategy when it comes to getting independents and especially getting Democrats to vote for you.

I see these candidates trying to pivot to talk about other issues in the general election, you know, more specifically to attack Democrats for, you know, their support may be of President Joe Biden and his policies, for the inflation that’s hitting Arizona quite a bit harder than some other states. But I don’t see these Trump-endorsed candidates – and that’s, you know, statewide down to legislative races – I don’t see them backing down from the full buy-in to, as you put it, the election lies that the president has been telling since 2020. And it’s going to be interesting to see how that plays out, if it hurts them in the general election, when, as you mentioned, especially in Arizona, independents are key to these statewide races.

We’ve seen that with victories like Joe Biden’s in 2020. And the fact that the two U.S. Senate seats in Arizona are now both occupied by Democrats who were able to appeal to their base but also appeal to the middle, those independent voters who have started to be turned off in some races by some of the more volatile, the more extremism politics that we’re seeing from candidates like Mark Finchem, that we’re seeing from Kari Lake and attorney general candidate here Abe Hamadeh. It’s just – it’s tough to envision them dropping the message that, oh, the election was stolen in 2020, and Trump should still be president.