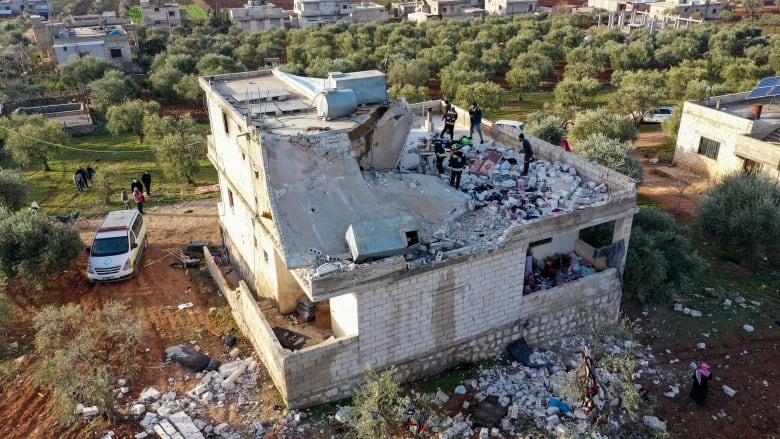 President Biden said that ISIS leader Ibrahim al-Hashimi al-Qurayshi blew himself up as U.S. special forces conducted a pre-dawn raid in northern Syria on Thursday. The president said all Americans returned safely from the operation and every effort was made to limit civilian casualties.

So Haji Abdullah is one of his honorifics. His full name is Abu Ibrahim al-Hashimi al-Qurayshi. He was the leader of ISIS. He was originally from Iraq, a guy in his mid-40s. Apparently became a militant during the past two decades of wars in the region. Now, he really became a senior figure in the Islamic State as it surged to prominence in 2014, took over all this territory in Syria and Iraq. The group was largely defeated by 2018, 2019, lost its territory.

The previous ISIS leader was killed. So al-Qurayshi took over about two years ago. Little was known about him. He kept a very low profile. We don’t have photos or videos of him. Still, he was on the radar. The State Department had listed him as a specially designated global terrorist. There was a $10 million reward for him. And U.S. officials said they had been planning this raid, at least for the past couple of months, and Biden had been in the loop.

I think back to a couple of years ago, in 2018, former President Donald Trump had declared that ISIS was defeated. And even though the so-called caliphate is gone – right? – the group doesn’t have control of, say, a physical territory in the same way that it did before, it still seems to be alive and operational.

ISIS-controlled territories shrinking over the years

And I think this is a very important distinction to make, that back in the 2014 period to 2018 or so, they had huge tracts of territory in Iraq, in Syria. They were governing, running those territories with millions of people under their control. They were collecting taxes, maintaining security and imposing their very, very aggressive form of Islam. So that’s all gone, but it’s almost impossible to completely defeat a group like this. So what they do have are small pockets that still operate.

And where al-Qurayshi was killed up in the northwest of Syria, this is a place where militant groups have been operating throughout the Syrian war. It’s – nobody’s been able to take full control of that area. And we’ve also seen a group pop up in many other countries across the region. They’re still considered active in a number of countries. Afghanistan is certainly one of those places. So the feeling is that group is still out there. They’re still dangerous. They can carry out attacks even though they don’t have a large sort of formal army controlling a defined piece of territory.

ISIS is still a threat in the Middle East

What we know based on what President Biden and others have said was that he was responsible. He was responsible for this big raid and other ISIS operations around the country. And just as a reminder, around January 20, the party caught a lot of people by surprise. Hundreds of ISIS fighters stormed this prison in northeastern Syria. There’s a – fighting begins.

There’s a real standoff, a lot of shooting. This thing lasts for over a week. Several hundred people get killed. But it really was an eye-opener that ISIS could organize and carry out such a large-scale attack. The feeling, I think, before that had been that they were capable of carrying out a suicide bombing here or a small-scale attack there. So this really was an eye-opener. But the U.S. still does have troops in Syria. They were active in helping put down that insurgency or that uprising at the prison, and they were available for this raid today.

So what happened is President Biden authorized Special Forces – U.S. Special Forces to go to Syria, to go to where Qurayshi was living – in a residential building occupied by him on the third floor, a lieutenant of his on the second floor and actually a family on the ground floor that, according to U.S. officials, had no knowledge of who was living above them. But what was interesting, is that it wasn’t an airstrike. It was U.S. Special Forces. And Biden made it very clear in his speech later on that this was purposeful. And it was purposeful because of concerns that he had and members of his administration had about the possibility of civilian casualties. It was interesting how it was repeated by Biden.

And I think it is important to remember the context here because the United States does have a controversial record on the use of airstrikes and civilians basically being killed by those airstrikes. It was not that long ago – our listeners will remember – that the Pentagon was acknowledging that an airstrike in August – August 29 actually – in Afghanistan was a mistake and that they killed 10 civilians. You know, that attack really, I think, opened some eyes. And obviously, there’s been past controversy about drone strikes.

So in this situation, the United States was very, very clear that they took – they went to great care, they took every step possible to limit the number of civilian deaths so far, to the point that they said the deaths that did happen, they repeated over and over again that it was at the hands of al-Qurayshi and the bomb that he detonated, killing himself, his wife and some of his children.

The most solid information we have right now comes from the White Helmets. This is this rescue group in Syria that’s been operating throughout the war and has a very good reputation. They said they arrived on the scene within moments of the U.S. forces leaving by helicopter. And they said they recovered 13 bodies, most of them women and children. They didn’t specify how they might have been killed. So this doesn’t necessarily contradict what the Pentagon was saying and what Pentagon spokesman John Kirby said, that when Qurayshi blew himself up on the third floor of this home, he also killed three other family members. So that may give us some general sense of what’s happening. This is still relatively new information. More is certain to come out. But right now, the most accurate figure we have is 13 people killed at the house.

This does seem like a substantial amount of military engagement from the Biden administration in the past month. Right? I’m thinking of this raid. I’m thinking of U.S. forces being involved the other week in that prison siege in Syria. That was the most substantial military engagement with ISIS since 2019. And on top of that, you’ve got troops now dispatched in Eastern Europe near Ukraine.

Yeah. I mean, it’s very clear that President Biden wants to reduce the use of Americans at war. I mean, he went to great lengths to end the war in Afghanistan and to great political costs that still seem to be materializing. And he’s been very clear. You mentioned the troops to Eastern Europe, but he’s also been very clear that he’s not going to send troops to Ukraine, which the U.S. feels Russia is threatening to invade. You know, and his key position – Biden’s key position is that his foreign policy is going to be for the middle class.

And I think a lot of Americans do not want to be – continue to be involved in these wars, these forever wars, as Biden puts it. But you mentioned and Greg mentioned the attack on the Syrian prison. And that has, you know, energized ISIS and certainly drawn the attention of the United States and the Biden administration. And President Biden – he made a point to say that this operation, the operation that led to al-Qurayshi’s death, was a warning to terrorist groups that – you know, that the United States is not going to stop and that this is a testament, in his words, to America’s reach and capability to take out threats no matter where they are.

President Biden wanted to get out of the lengthy wars

President Biden has wanted to get out of these long-running, open-ended wars for years. Even back in the days when he was vice president under President Obama. So when he came into office and pulled all U.S. forces out of Afghanistan, that was very much in keeping with what he wanted to do.

Now, he has talked about having small forces that can conduct counterterrorism operations, and the U.S. still has about probably somewhere around a thousand troops in Syria. We don’t talk about that very often. They’re not engaged in regular combat. But they’re there pretty quietly in the southern part of the country as sort of eyes and ears on Syria. They were involved in helping the Kurdish fighters put down that prison revolt that we saw the past couple of weeks. They were present to carry out this raid in northwestern Syria today.

How can the U.S. and its allies really limit the impact of ISIS through operations like this overnight raid? And is that enough?

The U.S. is not able to keep an eye on all threats

When you cite this total of three dozen different countries, it does tell you something. The U.S. can’t do this alone. They can’t be everywhere. And, indeed, the threat in many cases is not so much directly to the U.S. It may be to those various countries. And we’re talking, in many cases, sort of small numbers of ISIS fighters. But they can grow, and they can develop. So the U.S. is trying to keep an eye on a very, very broad swath of territory throughout the Middle East and into South Asia.

Now, I think the U.S. fears that there’s sort of three countries in particular that really count here. One is Syria, where we saw the U.S. respond today and where ISIS really began, next door in Iraq, where it also captured a lot of territory in the previous decade, and then in Afghanistan, where it’s seen as still a threat. So it is a challenge to be in so many different places at the same time.

Yeah. I think it also just shows how difficult it is going to be and continues to be for the United States and for the Biden administration to kind of shift its attention away from this region of the world as it tries to focus more on China. The United States appears to be dragged back to the Middle East and Southeast Asia and these challenges when, you know, Biden has said himself he’s looking to move focus and resources to the future competitive competition with China.