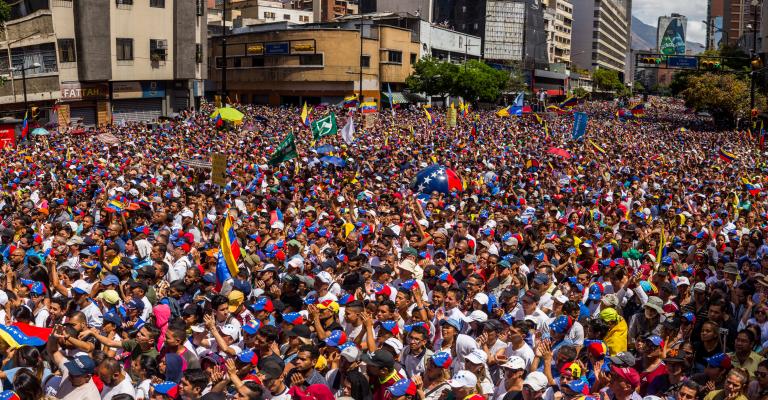 As some of you may know— the Venezuelan assemblian leader declared himself to be the President of Venezuela over the weekend causing a fury of countries to start legitimizing the opposition leader as the national leader. John Bolton was seen during a recent WH presser as showcasing the potential U.S. strategy on a legal notepad which suggests that troops were going to be on the ground in Venezuela.

“We know that this will have consequences,” he told the cheering crowd. “To be able to achieve this task and to re-establish the constitution we need the agreement of all Venezuelans.”

What does Trump have to gain from recognizing Juan Guaido as the President of Venezuela? Well for starteres, it puts more pressure on the Venezuelan and people who are protesting Nicolas Maduro. Just who is Juan Guaido? He is a relatively unknown politician who went to superstardome over the weekend for protesting a dictatorial regime— it would be the first time since 2017 since this has happened. Maduro supporters are painting opposition leaders as Who Is Juan Guaidó? Venezuela’s Young Opposition Leader

“Guaidó: I have already gotten your jail cell ready with the right uniform, and I hope you name your cabinet quickly to know who will keep you company, you stupid kid.”

Recently, Mike Pence made a youtube video to twitter to try to urge Venezuelans to stand up to their Government saying Maduro was:

a “dictator with no legitimate claim to power.” Mr. Pence said he recognized the National Assembly, led by Mr. Guaidó, as “the last vestige of democracy in your country,” and stated that, “we are with you, we stand with you, and we will stay with you until democracy is restored and you reclaim your birthright of libertad.”

All of this foreign attention with Governments giving attention to Guaido— has lead Maduro to claim that foreign powers have been interfering in the affairs of their country. Does this seem to sway the opposition? Not really. The opposition is buoyed by the swell of support and they wish to court the military as their allies (NYT). Guaido may not have been the elected leader by any metric, however, it looks like he’s keeping the spirit of Democracy alive in Venezuela.

After putting their full support in Egypt’s opposition and noting where they are now— especially while living under a military dictatorship with the army claiming they’ll have elections once they’re stable enough— The United States should treat caution. It’s so easy to start a revolution— the problem is with finishing it. So, anyone who is trying to support Guaido needs to heed the lessons of the past.

Update: I fixed a broken link in the original reporting and added style to the article.