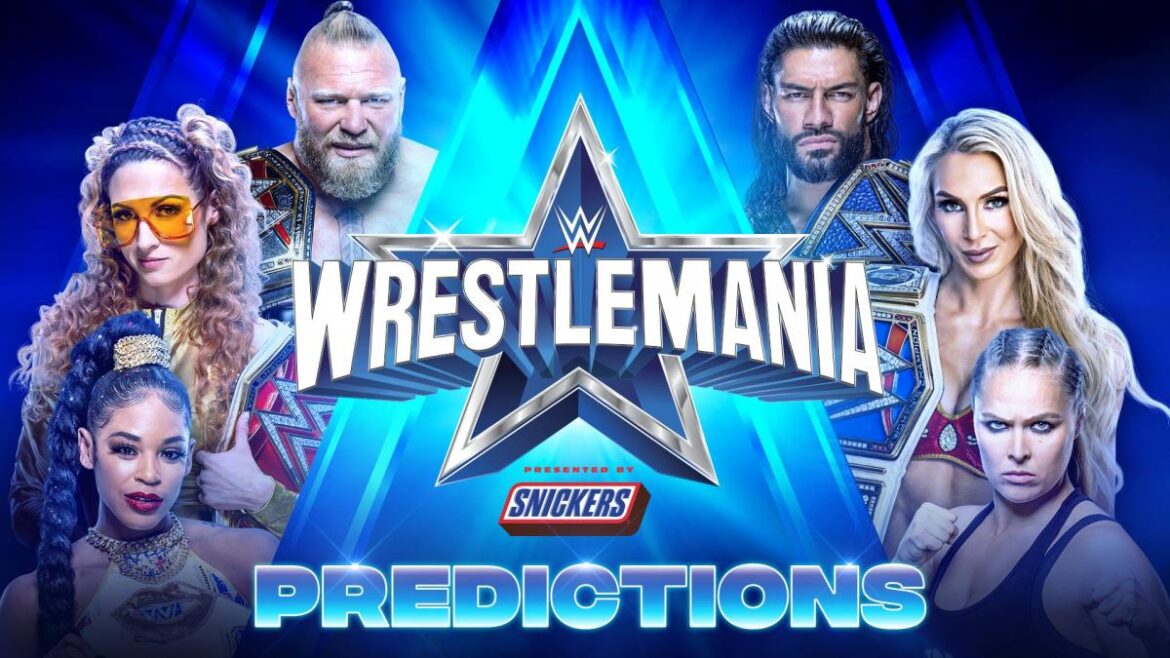 In what WWE is billing as “the biggest WrestleMania match in history,” Brock Lesnar vs. Roman Reigns will headline Night 2 of WrestleMania 38 on Sunday.

As much as it’s hyperbolic to give any match that level of hype, the stakes for Lesnar vs. Reigns are high enough that it doesn’t come off as being too much of an exaggeration. It’s the two biggest stars in WWE right now facing off in a winner-take-all match to unify the WWE championship and universal championship.

This will be the third time that a Lesnar vs. Reigns match has headlined WrestleMania. The two previously faced each other in the main events of WrestleMania 31 in 2015 and WrestleMania 34 in ’18. But the versions of Lesnar and Reigns that we’re getting this year are totally different from who they used to be. As characters, both Lesnar and Reigns are better than they’ve ever been. The current babyface, cowboy hat-wearing version of Lesnar has been so much fun to watch, and Reigns and Paul Heyman are fantastic villains to oppose him.

Lesnar and Reigns have been built up so strongly that it’s hard to see where either character goes if they lose this feud. If Lesnar loses, he’d need to find a new focus instead of chasing Reigns and trying to get revenge on Heyman. If Reigns loses, it would end a run of dominance that’s been going on for almost two years.

A pair of celebrities will also be in action on Night 2. Former NFL player Pat McAfee will shift from the SmackDown broadcast booth to the ring as he takes on Austin Theory. Jackass star Johnny Knoxville will continue his feud with Sami Zayn in an anything goes match.

WrestleMania 38 Night 2 main card will stream live on Peacock/WWE Network at 8 p.m. ET on Sunday, with a two-hour pre-show before the event.

Here’s a full rundown of the card, along with predictions for each match:

There’s a compelling case to be made for either Lesnar or Reigns walking out of WrestleMania 38 as the unified champion. As the babyface, Lesnar vanquishing Reigns and finally getting payback on Heyman is what would traditionally be the most logical outcome. There’s definitely a strong chance that WWE goes in that direction.

But with the stakes being so high, this is an opportunity to continue adding to Reigns’s legacy. He’s been so dominant since becoming universal champion in August 2020. He defeated both Daniel Bryan and Edge in the main event of WrestleMania last year, stacking them on top of each other and pinning them at the same time. Defeating Lesnar to unify the WWE and universal titles would be the biggest notch on Reigns’s belt to date. Reigns is the focal point of WWE right now and is going to main event WrestleMania every year for the foreseeable future. There’s more to be gained from Reigns winning this match than Lesnar.

The loser of the match will surely be kept strong even in defeat. A finish where Heyman interferes gets laid out with an F5 by Lesnar, and the distraction causes Reigns to win would make sense.

Styles facing Edge at WrestleMania is a dream match that seemed impossible not that many years ago. With Styles signing with WWE in 2016 and Edge coming out of retirement in ’20, the two will meet in a one-on-one match for the first time. The match was announced for WrestleMania after Styles answered an open challenge that was issued by Edge. Edge then turned heel, attacking Styles and giving him two con-chair-tos.

This should be one of the best matches on either night of WrestleMania. Given that he just recently underwent a character change, Edge probably needs the win more.

After previously wrestling two matches in NXT, McAfee will make his main roster in-ring debut on the biggest stage that WWE has to offer. He’s taking on Theory, who is Vince McMahon’s protege on WWE television. The feud between the two started when Theory confronted McAfee on SmackDown following an appearance by McMahon on The Pat McAfee Show.

Calling this a “celebrity match” almost feels like an insult to McAfee. He’s a better pro wrestler than most full-time wrestlers. He’s so great on the microphone and was legitimately impressive in the ring both times that he wrestled in NXT. McAfee is someone who would have been one of the biggest stars in the industry if he dedicated his time to pro wrestling.

McAfee will fulfill a childhood dream when he competes at WrestleMania. If he’s willing to do more matches in the future, there’s no ceiling to what McAfee can achieve as a wrestler.

Anything goes match: Zayn vs. Knoxville

The issues between Zayn and Knoxville began when Zayn took exception to Knoxville being an entrant in this year’s Royal Rumble match. During the build to WrestleMania, a distraction by Knoxville resulted in Zayn losing the intercontinental title to Ricochet.

Following his appearance in the Royal Rumble, this will be Knoxville’s second-ever match. The “anything goes” stipulation that Zayn proposed for it will prove to be Zayn’s downfall. Anyone is free to get involved, meaning that we should see some of Knoxville’s Jackass co-stars appear and help him get the victory.

Queen Zelina and Carmella vs. Sasha Banks and Naomi vs. Rhea Ripley and Liv Morgan vs. Natalya and Shayna Baszler for the women’s tag team titles

If WWE isn’t going to put any effort into the women’s tag team title scene, there’s no reason to keep the belts around. The purpose of this match is just to get more people on the WrestleMania card. It doesn’t matter who wins—WWE isn’t going to treat the titles as important on any kind of sustained basis.

Sasha Banks being mostly an afterthought at WrestleMania 38 is really disappointing. She’s one of the best wrestlers in the world and should be near the top of the card at every WrestleMania. WWE needs to do a better job of creating marquee women’s matches that don’t involve the Raw or SmackDown women’s championship.

With Lashley returning from a shoulder injury, his match against Omos was made official less than a week before WrestleMania. The result of the match will say a lot about Omos’ future in WWE. Standing at 7’3″, Omos (former college basketball player Jordan Omogbehin) offers size that no one else on the roster has. Unfortunately, that’s all that he really has going for him. Once you beat him and kill the mystique of that size, it will be almost impossible to recover from.

Lashley is one of the most protected wrestlers in WWE. Him losing in such a low spot on the card would be a weird choice, but WWE isn’t going to give up on Omos yet. Omos can get an underhanded win, with Lashley’s manager MVP potentially turning against him to align with Omos.

All three of these teams are viable candidates to win. RK-Bro are the biggest stars in the match, The Street Profits are due for another tag team title reign, and Gable and Otis are a really entertaining heel team. Orton and Riddle retaining their titles is what would get the best reaction.