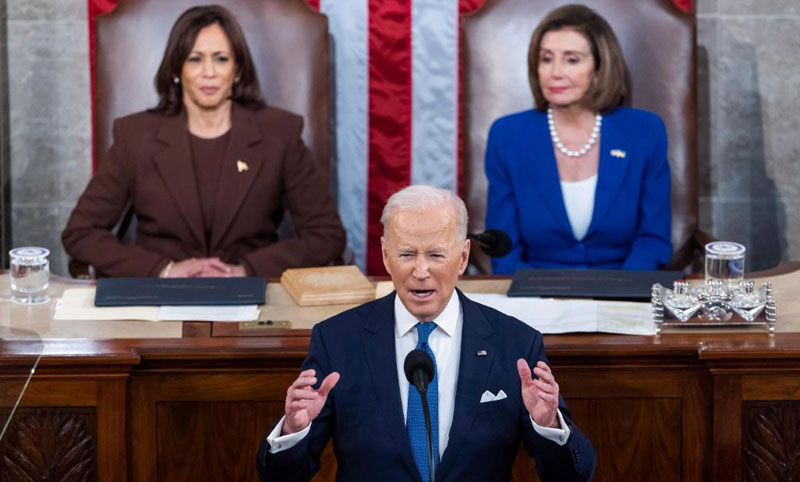 After decades of State of the Union speeches that drone on for nearly two hours, a verbose man with a history of windbaggery finished in barely an hour. President Joe Biden’s speech was over soon after it began, and forgotten a few moments later. Perhaps Biden finished so quickly because deep down he knew he had nothing to say. His 2022 speech was a State of the Useless. He was for puppies and kittens, against cancer, and heavily reliant on stale platitudes and tired cliches.

When the angry Squad and their leftist wishlist meet Seinfeld, the result is a speech about everything and nothing. At least he managed to avoid cracking jokes like “The State of the U in ’22 is in deep doggie doo.”

Biden ended mask mandates in the Capitol the day of the State of the Union.

The faux president was desperate to try and show normalcy in a world he made crazy. He insisted that we come together and not weaponize Covid after two years of weaponizing Covid. Remember, Biden weaponized Covid to get elected and unleashed his own version of Mao Tse-Tung’s Red Army on anyone choosing freedom over mask slavery.

Biden insisted that he was against defunding the police while letting his Democrat Party gut police departments in cities all across America.

He reiterated his policy of tough inaction with Russia. Vladimir Putin’s invasion of Ukraine is encountering resistance from Ukrainians, but that has nothing to do with the Biden Administration. Putin has a free hand, and he knows it.

He mentioned Iran once when he accidentally confused Iranians with Ukrainians. He barely referenced China without admitting that the Chinese Communist Government created the Coronavirus in a Wuhan lab and unleashed it on the world. Over one million Americans were murdered, and Biden refuses to call out the murderers.

Inflation is skyrocketing, yet Biden keeps babbling about climate change. Enacting the leftist greenies agenda will only lead to higher gas prices. Biden again blamed skyrocketing food prices on beef manufacturers. Then the president kept attacking businesses due to his own lack of understanding of how a business works.

Biden did not discuss his own business experience because he has none.

But the evidence simply disputes his rainbow lollipop unicorn world. Biden’s biggest problem is his inability to do the job he was elected to do. He got innocent Americans killed due to his bungled withdrawal from Afghanistan. He blamed the 2017 Trump tax cuts for harming the economy despite overwhelming evidence that they directly fueled spectacular economic growth.

Americans know they are worse off than one year ago. They know that Biden’s policies are the reason why. Biden’s speech will have a shelf life of already expired. After Iowa Governor Kim Reynolds gave a calm, sober rebuttal, networks returned to covering Russia invading Ukraine.

With the midterms eight months away, Biden is at best utterly irrelevant and at worst politically toxic. Putin acts, Biden talks, and the world gets more dangerous by the day.

The only thing that would make the 2022 State of the Useless even more farcical would be having a member of the Squad offer an imbecilic rebuttal to her own party. Michigan Congresswoman Rashida Tlaib obliged. She had even less to say than Biden, and most networks ignored her remarks. Biden would have been better off had the media extended him that same courtesy.